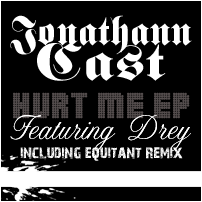 Jonathann Cast is a very young composer, about 20 years old. He became fascinated by electronic music when he was still a kid and has already released a few vinyls and digital releases (often compilations) as well as some remixes. The opening song "Destruction" from this maxi is absolutely gorgeous! This is pure techno-EBM, which I can't better define as the offspring between techno beats and tricks at one side and analogue sounds à la Front 242 at the other side. The title song is quite cool as well, but the "Original Mix" isn't the best one. Equitant took the two other remixes for their part. The bass line and technoid bleeps are in real harmony here while there is an astonishing power emerging from the tracks. The female vocals are quite rudimentary (like it often is with techno music), but absolutely sexy (especially the few words in French language). Notice by the way that the female vocals are coming from guest vocalist Drey who already contributed to other releases on Black Montanas. "Hurt Me" will for sure hurt many dancefloors by its high EBM-tech adrenaline vibes.
(DP:8/9)DP.