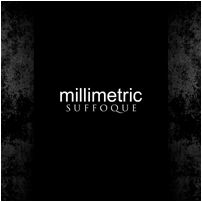 François-Xavier Michel better known as Millimetric comes back with this digital release. I'm still under the influence of the revolutionary debut full length "Expériences Modernes" released a few months ago now on M-Tronic. The author he dives into a more minimal EBM approach featuring vocals of guest singer Drey. Drey has a very hydrogen kind of vocals injecting some sexy confusion to the "Suffoque"-song. Millimetric's "Suffoque"-version is rather quiet and minimalist in sound. We here experience a more experimental aspect from this projects' potential. The song is rather synthetic and analogue in style. We next get a remix by Equitant. It's a little more into power while I especially like the kind of Kraftwerk-tones. I'm afraid this is not the best way to get introduced to the work of Millimetric although it remains an acceptable release.
(DP:7)DP.